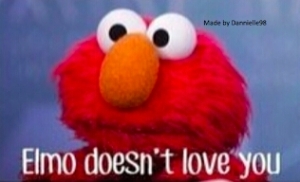 He looks so innocent; he makes you want to protect him. Last night, I failed him. I had the bucket as close to my little guy as it could get, but he still managed to throw up all over Elmo.

Now, I can hear him (Elmo, not my little guy), the *thunk, thunk, thunk* of his hard, plastic eyeballs clanking against the dryer.

The kiddo is better today. He just high-fived his own foot, because he’s four and weird, like a four year old. The day was filled with bland food but lots of giggles, goofiness and smiles. But if I feel like I failed Elmo last night, it’s nothing to how I failed my kiddo.

Nobody ever warns you about how terrifying it is to be a parent. Maybe they know that doing so would result in the end of the human race. Or maybe they do tell you, but there are just no words convincing enough to convey the straight-frigid panicky terror that accompanies having a kid.

There is science behind that terror, the love hormone oxytocin, the genetic drive to carry on the lineage, the chemical reactions that lead to this ferocious protective fear. But I can’t really accept that this is science. It is magic, possibly dark sorcery, and it feels too good and bad to care or even try to understand it. Those little chubby cheeks and those trusting eyes, that laugh, those hugs… they have me under a soul-deep spell.

When something bypasses my vigilance, no matter how minor, it feels like failing. That threatening terror when it mixes with thick, late darkness, is crazy-making. The deep chill night makes even a cold or a tummy ache seem treacherous. Last night was no big deal (knock wood — and you know I did). By two it had worked itself out, and he was sleeping soundly.

The time before that, it was a virus that caused a breathing problem; it was a trip to the emergency room, then all night watching, and putting medicine in his nebulizer and gripping his hand maybe too firmly. It was being too tired to think and to terrified to sleep. It was a night of constantly checking, bargaining and fighting blackness. That night was a month long. Never has the sun been so slow or so welcome.

That night gave birth to this paragraph which made its way into my work in progress:

“It usually happened after dark, during a night that decided to be bleak and relentless. Some nights were like that. They were greedy and parasitic. They clawed at the hands of clocks dragging them backward, devouring minutes or even hours that belonged to the daytime. She had been trapped in some acrid, poisonous, predawn hours for so long that when the morning finally broke, she was sure it was just part of another cruel dream.”

My character and I understood each other so well after that night. Neither of us was thrilled to.

Tonight (knock wood — and you know I did), my son sleeps soundly, and once Elmo stops clanking around the dryer, he will be none the worse for the wear. And tonight I say a prayer, whisper a spell, and send a bright light to any parent who is trapped in a terrible night. May dawn be prompt and bring joyous relief.

The thing I discovered (along with most mothers) is how irrevocable the transformation to motherhood is. Before Chris, I had a vacation-like easy life. At least it seems so in retrospect. I had extra money, extra time, I traveled, I went out with friends, I slept a LOT.

After Chris, I’m a relatively broke, sleep deprived homebody, with chronic short-term memory loss. And at the risk of sounding cheesy, I wouldn’t change it for the world.

I used to hear that and similar sentiments before having a kid, and I thought, “Well, duh, it’s not like you can change it. What else would you say?” But now I’m on this side of things, and I’m like, “OH!!! Nope, I really wouldn’t change it.” I am delighted by my son, even when he is being a monster. Nothing on Earth has ever made me happier or entertained me more and it’s worth every puke covered top, broken knick-knack and lost night of sleep.

I consider myself a pretty responsible human being, but I still can’t believe I have been trusted to take care of something so good. So, my brain can’t even go to any imaginary place that doesn’t include me being Chris’s mom. My rational, lazy mind has been replaced with this constant terror-alert– PROTECT PROTECT PROTECT. If no immediate danger is apparent, the alert will be downgraded to WHAT-IF WHAT-IF WHAT-IF… Promptly bringing it back up to terror.

That means it is not possible to wish for my life before. If I try to imagine a situation where I am relieved of nonstop laundry, long sleepless nights, a constantly messy house and a drained bank account, I have to rely on science fiction.

“Wouldn’t it be great,” I’d think, “If I had a pause button for the world?” Smilingly dopily at the idea of pressing a button on a remote and freezing a tantrum mid-shriek so I could catch a nap on the couch.

I watched “Inception” like it was an educational film. “I see, so if I had a dream, within a dream within a dream that I was sleeping… I could sleep for 3 days straight? Guess I gotta get me one of those talisman thingies. Let’s do this.”