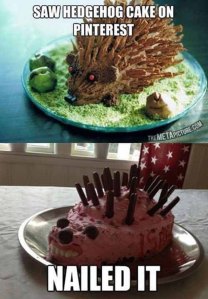 I had a plan, but lately my plans are a little mushy, missing important connections, with jello for transitions. I’m not sure why. Maybe it’s because my fiction world is pushing into my real world. Maybe it’s because I’m not sleeping enough, again. Or maybe I’m just getting dumber.

This week is my best friend’s ___th birthday, and I will have the rare pleasure of seeing him near it. My PLAN was to bring a sentimental bottle of Goldschläger (shout out to my Swiss homies) and bake him something. Ideally, it would be a chocolate cake with vanilla frosting, but I will be travelling to meet him and such a confection might not last the journey. He likes brownies, though, and I’m a pretty good brownie baker (it’s true! I won’t make many positive claims about my kitchen skills, but I have some specialties that always get rave reviews, and brownies are one of them).

But tonight, I failed. The only Goldschläger to be found was sold in a three gallon bottle, or whatever the metric conversion is. I’m happy to bring him that much, but skeptical such a bottle would survive the flight.

THEN when I was baking, my mushy brain tried to do math while I was also trying to think of everything I need to do for my trip in the morning. I had to halve the recipe and I halved everything but the salt (and judging from the taste, I MIGHT have doubled the baking soda). I can still taste the cloying bitterness. That had to be the baking soda. There may have been a little charm in chocolate and sea salt, but not chocolate and sodium bicarbonate. I had to eat four or five before I could tell for sure. What? They’re brownies. I’m not made of stone.

Now, aside from a card and my meager self, I have nothing to offer. I will buy him a drink, of course, and find him a cake in our travels. But I’m bummed, because he is so special. Maybe you are lucky enough to have a friend like John. But (and I apologize) I don’t think so, because he really is one of a kind.

He is funny and smart, brilliant actually. But he is also kind and compassionate. I was life-changingly fortunate enough to have him as a friend during one of the most difficult times of my life. We worked together, and on one of my very rough days, I came into our shared office. It was crowded that day, and there was no chance to talk, but amid the chaos, he came over and stood next to me so our shoulders were touching. It was a little covert hug, a secret message of support, And I was so grateful.

Another time, I came right to the office after spending the night in the hospital, and he gently dragged me back out to buy me breakfast. I remember always being dazed at that time, and I might have stared at the menu a little blankly. He ordered for me, trying to pick things that were high in protein and vitamins. Those days, I was terrible at asking for help and terrible at making simple decisions about myself, and what a relief it was to have someone who showed he cared in that way.

That all was years ago, but in the time since, that is the kind of constant caring he has showed me as a friend. The thing about John is that he is so honorable, that anyone who is lucky enough to know him can’t help but become a better person. I know I’m a better person because of him. Never as good as him — that is an impossible goal. But I am so grateful he lets me love him.

Shit. I think I should go bake some more brownies.

Happy Belated Birthday John, from your empty-handed but fiercely loyal and mushbrained friend. I can’t wait to hug you!!

Other things about John I hope he doesn’t mind me telling you:

He knows every word to every Smith’s song and every word to all the song in Les Mis, and you would be surprised how hard it is to tell the difference between the two.

He loves to play with words, and is a deadly punner.

He loves the color blue, especially aqua, which is fitting because he has beautiful blue eyes.

He learns languages and steals words from them to supplement his English.

He is very modest and this post might make him a little uncomfortable if he ever finds out about it. So shhhh.